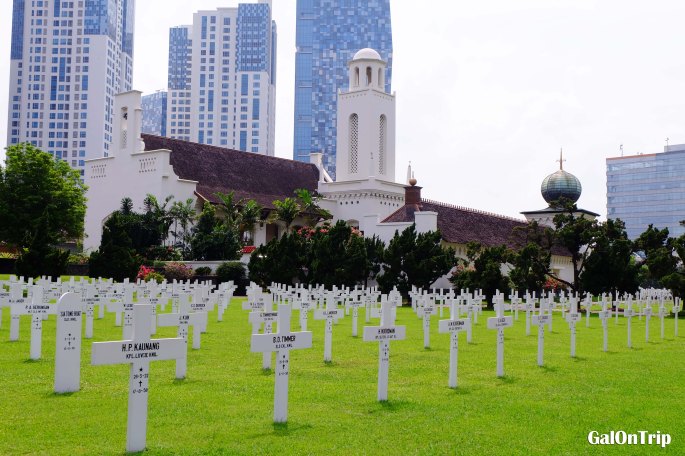 It is quite a wonder that in Jakarta, Indonesia’s capital surrounded by shopping malls and tall buildings, still has a few hidden green areas left delivering a piece of Indonesian history during Dutch colonization era. Situated in South Jakarta, Ereveld Menteng Pulo, the honorary cemetery, is one of it. Those days, Menteng Pulo was a suburban area of Menteng, somewhat isolated from the crowds. Once you walk in and pass the gate, the common perception about cemeteries in Indonesia, which is often filthy and frightening, will soon fade away.

Speaking of which, there’s an interesting story behind Menteng itself. Menteng is a luxurious residential area in South Jakarta where high rank government officials live, as well as the place where the 44th President of the United States, Barack Obama, spent his 4-year childhood in Indonesia. If there’s no traffic jam, from Menteng to Menteng Pulo takes about 10 minutes by car.

Now, let’s go back to our main topic.

Ereveld Menteng Pulo is the resting place for over 4000 war victims of World War II (1939-1945), especially who died from a Japanese concentration camp, and the revolution after that (1945-1949). The honorary cemetery was inaugurated on December 8, 1947, managed by Netherlands War Graves Foundation or OGS (Oorlogsgravenstichting).

Between 1960 and 1970, war victims from Ereveld outside Java Island, such as Manado, Tarakan, Makassar and Palembang, were relocated and reburied in Ereveld Menteng Pulo. Therefore, from 22 Ereveld cemeteries nationwide, now only 7 left. All of them are in Java Island, including 2 in Jakarta. Besides in Menteng Pulo, which is the biggest and the most beautiful of all, there’s also Ereveld in Ancol, North Jakarta.

Those who are buried here are Dutch and Indonesian soldiers under KNIL (Koninklijk Nederlands Indisch Leger) or Royal Netherlands East Indies Army. However, what makes Ereveld Menteng Pulo is particular is that only 25 percent of the victims are actually from military services and the rest are civilians, including children.

There are unwritten house rules applied at the honorary cemetery. While walking around it, you should start from the foot part of the grave in order not to step on the head part. Another important thing is that the names of the deceased should be blurred before publishing the pictures in any (social) media. Otherwise, take pictures from the rear side of the graves, so the names won’t appear.

Take a closer look at the graves and you will immediately notice that there are 6 grave markers defining the victim’s religion. The round shape is Buddha, the 3 petal-shaped is Muslim, the David star is Jewish, the huge shield shape is a mass grave and the cross shape is Christian.

For Christians, there are 2 kinds of cross to distinguish the gender. The plain cross is male and the one with 3 petals on the edges is female. Suppose you see smaller and shorter cross graves, they belong to Christian children with no specified gender. It’s breaking my heart to see the war victims include babies aged 3 to 6 months old.

And more more thing. When the graves are written ontbekend, meaning unknown in Dutch, they stand for unidentified victims. 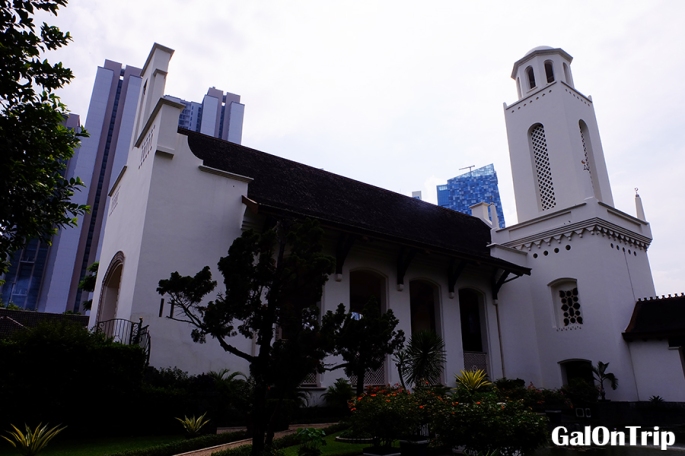 Although Simultaan Church is a “church” having an altar, a big Dutch language bible and a cross, it actually holds memorial services and other ceremonial events for various religions, not specifically for Christian Sunday services.

A huge cross monument made of wooden railroad in Burma on the right side of the altar was built to commemorate Dutch, Australians, American and British soldiers who died from forced labour by the Japanese during the construction of a railroad in Burma.

Apart from graves, Ereveld Menteng Pulo also houses 754 ashes of Dutch soldiers, who died in the Japanese concentration camp during World War II, in the columbarium situated outside Simultaan Church.

Thanks to Robbert CJM van de Rijdt, the director of Ereveld, who has a fond of plants and flowers, the largest honorary cemetery in the country has varieties of flower, including lotuses in the pond, that makes the environment within the complex more beautiful and serene.

Fresh flowers or garland placed on the grave or the columbarium prove that there are still families who visit their loved ones at the cemetery, not only tourists for a place of interest. 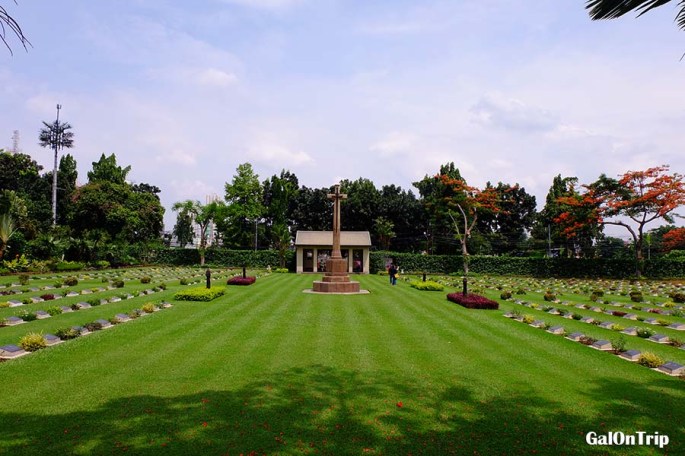 Inside Ereveld Menteng Pulo, there’s also a special cemetery complex managed by the British Kingdom. To distinguish its territory, the land position is slightly higher and a small fence as a border.

One of the prominent British military figures buried here is Brigadier General Mallaby, who died during the shootout in Surabaya, triggering the Battle of Surabaya, because Indonesian troops ignored the British ultimatum to surrender unconditionally. Nowadays, the battle’s commemoration is held annually on November 10 nationwide. 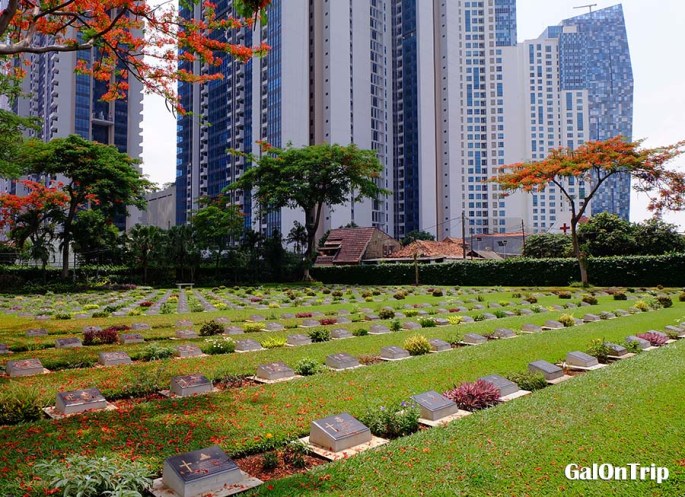 Besides, there are also war victims from other Commonwealth countries, such as Australians, Canada, American, Pakistani and Indian.

As a silent witness of World War II and Dutch occupation in Indonesia, Ereveld Menteng Pulo reminds us that war is not the solution in any cases and has killed a lot of innocent people, especially there are more civilians that soldiers buried here. To pay the last respect of the victims, embrace peace and love in any situation.

The visit to Ereveld Menteng Pulo is free of charge, opening from 7 am to 5 pm. Anyways, I heard that the sunset view is magnificent. Ask for a permission if you want to stay longer to enjoy or immortalize the moment since sunset occurs after 5.30 pm.

Despite its historical value, I receive complaints from the security that there are certain visitors having bad habits, from littering, making noises, until dating in inappropriate way as if the place were their own backyard. Gosh, I hope they know what they’re doing to this wonderful place! 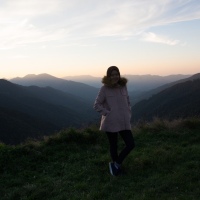 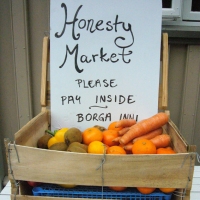 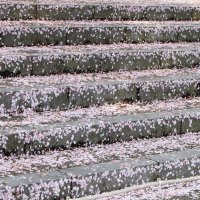 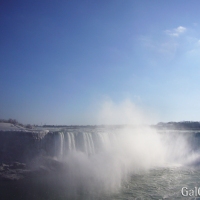 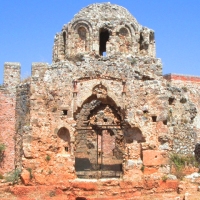 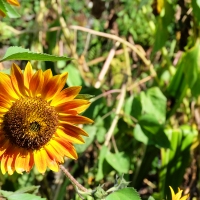