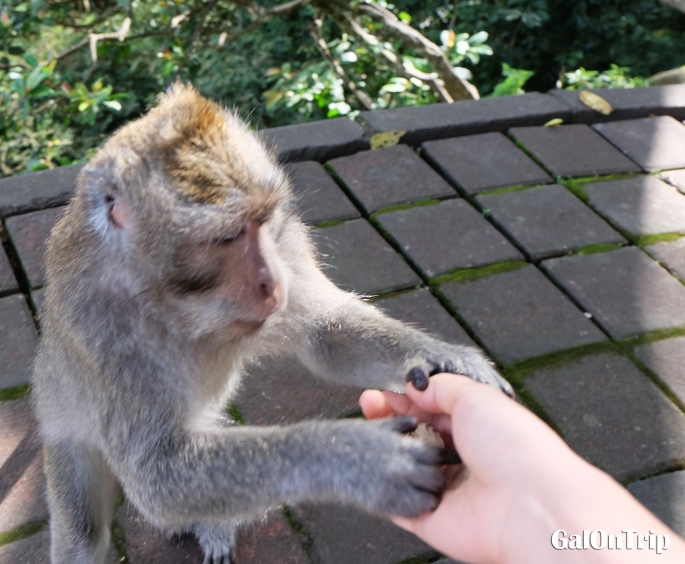 As we all know, monkeys are intelligent animals in many ways, even considered the closest relatives to human beings. Nonetheless, when it comes to interacting with people, there are pros and cons. Some say they are cute and lovely, some say they are nasty and dangerous. Which one do you think is right?

For me, they are just unpredictable. So I stay safe when I face them. Don’t wear accessories, from earrings, a hat to sunglasses. Don’t feed them. Don’t touch them. When they climb on me, keep calm until they go down themselves. The only thing I dare to is to look at them and take pictures, but trying my best not too close to the subjects.

But a single shot experience in Buleleng may change my perception about monkeys. FYI, Buleleng is a regency situated in the north side of Bali, whose capital city is Singaraja. Suppose you’ve been to Kuta and Denpasar in south Bali, it takes about 2 hours drive from the south to the north. It is said that the monkeys in Buleleng are nice and don’t steal stuff.

ARE THESE MONKEYS THAT NICE?

When I was on my way up to Wanagiri Village, passing the hilly road in Buleleng, my dad asked the driver to pull over and stop the car on the side of the street full of long-tailed monkeys.

“Here?” I asked with disbelieve.

I’d always thought that the location would be either a park, a sanctuary or a zoo. Forget about a place like Monkey Forest in Ubud. It’s actually located on the side of the busy street, facing the beautiful lake Buyan and Tamblingan. No entrance fee needed to see these monkeys. They were just everywhere, especially in the forest where they reside across the street. I could even see them from the car window.

When I got off from the car, I saw a lady leaving the hut nearby, bringing a basket of peanuts and bananas, and started feeding a fat monkey with peanuts. However, he hissed, showing his small yet sharp teeth and eyes wide open. I was a bit shocked.

“That’s all right. He just wants bananas, not peanuts.” She tried to calm me down, convincing that feeding monkeys in the area is safe. I didn’t know monkeys could be so demanding.

Having changed the bait into a banana, the fat monkey, let’s call him Jack, quickly grabbed and enjoyed it for himself.

Next, she fed the smaller monkey, let’s call him Chad, on top of the roof. Later on, she gave me a turn to feed the perpetually hungry monkeys, passing me the basket. Since I know it wouldn’t be for free, I asked her how much it is.

Rp. 20.000 ($1.5) for a basket filled with 7 pieces of banana and a handful of peanuts is not too expensive compared to buying banana for Rp. 10.000  ($ 0.80) per piece in Monkey Forest. You can bring your own food, but I wasn’t ready. Anyways, she or anyone else in charge for the monkeys would be much happier if you get a basket of food from her or him.

I started giving a piece of banana to Chad, yet he unexpectedly move a few steps behind. The lady suggested me to move my hand further toward the monkey, therefore he could reach the food more easily. Well, I was just being cautious no matter how tame they are, that’s all.

However, in seconds, I noticed that real the reason why Chad couldn’t grab the peanuts from my hand was because he didn’t dare to step further. He could have done that, but Jack was standing in front of the hut while staring at the rooftop. It turned out that Chad was intimidated by Jack’s presence.

That also happened to other monkeys whose body size were just like Chad. I fed all of them equally, interchangeably between peanuts and bananas. However, when Jack was near them, they kept the distance from him, even ran away until the situation is “safe”.

Jack was indeed territorial as if he ran the world. He only wanted the food for himself, not really pleased when other smaller monkeys accepted it from men’s hands. He even chased those monkeys, including Chad, trying to scare them off. I did my best to give all the content in the basket for those poor monkeys, rather than Jack. Although I still spare some for Jack.

Despite Jack’s domination and the poor monkeys, it is true that they are more “polite” than those in other areas. They only approach you when there’s food in your hands meant for them. Nothing more. They don’t grab sunglasses, hats or accessories. They don’t climb on you. They don’t bite. In one condition: as long as you don’t touch them.

A few days later, we passed the same street, going down to the airport. I spotted some tourists holding a camera feeding the same monkeys I fed last time. Due to the development of tourism in north Bali, the cuteness of the monkeys is getting more popular. Feeding them is indeed a fun activity for many.

FUN, YET NOT WISE

Nonetheless, weeks after returning home, I accidentally stumbled upon on Mongabay, an environment news site, mentioning that actually it is unwise to feed them because nowadays the monkeys are 3 times fatter than how it should be. Overfeeding does not only have an impact on their health, but also changes their surviving behaviour in the wild and increase their aggressiveness on searching for food.

If I knew it from the start, I wouldn’t have done what I did.

In that case, local government should educate its people on side effects of offering monkey feeding activities for tourists to earn money, although it’s not a quick scheme to get the expected results to protect the future of  long-tailed monkeys population.